Already wednesday evening, right after work, I drove up to my friend Irene’s cabin.  My car filled with my sewing machine, a lot of projects and other quilting stuff. 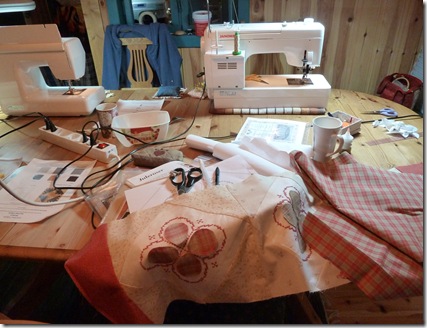 Sewingmachines on the table at once I came there.  Had to use the night evening to sew, because……….. 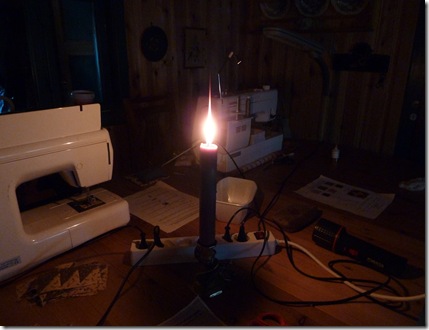 ….thursday the electricity was gone from early morning to late evening.  And it was a dark rainy day so it was not possible to do even handstitcing in the candle light.

When the two other ladies arrived late thursday evening the electricity had come back, but Irene and I had decided to play them a little trick.  The main swith for the electricity was turned off, and we told them that we was to be with no power for the rest of the weekend.  We kept them in doubt for over an hour, then we turned the light on.  Lot of laughter and they told us that they really had in mind going home the next day if there was not to be any sewing this weekend.

But there was to be A LOT of sewing this weekend. 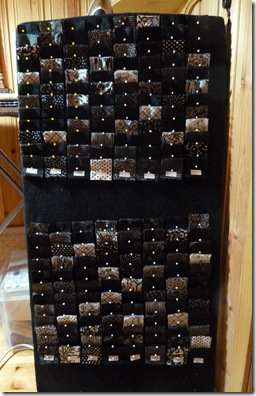 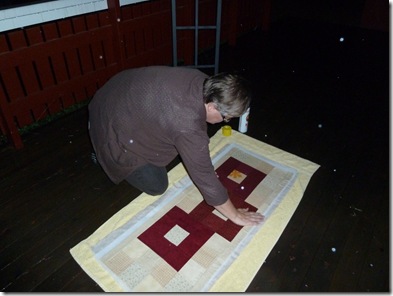 It is a small cabin and we have to use all kind of places to work on.  Glue basting a quilt have to be done outdoors, even if it is dark and raining. 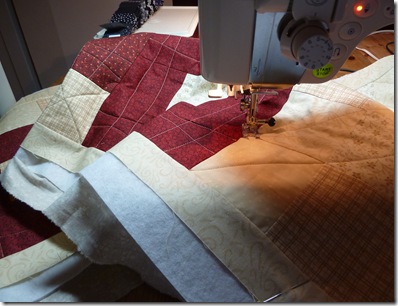 I had brought a lot of UFO’s WISP’s and it was fun working on them again. 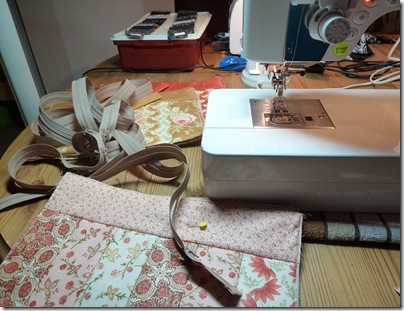 I also had to try a new pattern, and mad not one but four make up purses.  When making one, it is so fast and easy to make several more (chain sewing). 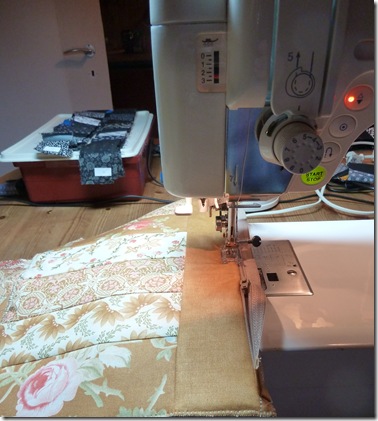 And this pattern had such an easy way sewing zippers.  Loved it, and I want to experiment more with this pattern. 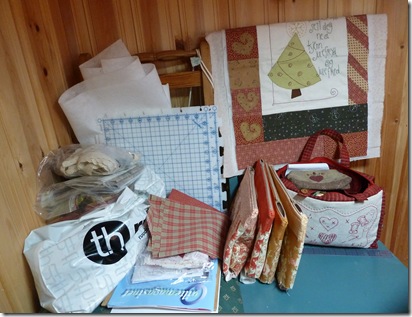 My workspace this weekend. 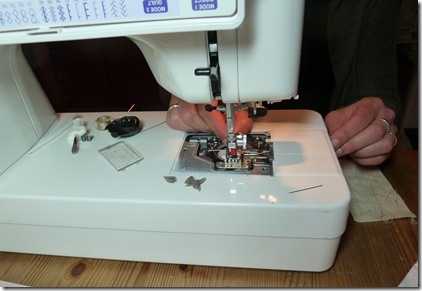 And what did I sew on this weekend 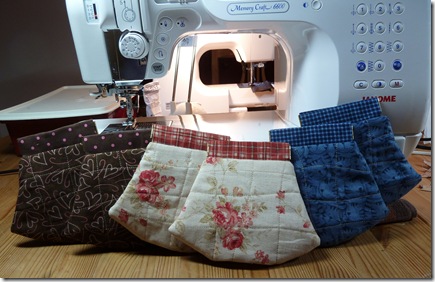 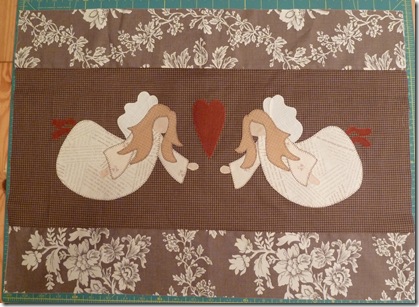 Did all the applique on this pillow.  Now I have to quilt and sew it together.

Did all the applique and stitching on this table runner.  Changed the pattern a little bit from the original.  I added the outher borders on the sides because i wanted a wider tablerunner.  Now I have to quilt it. 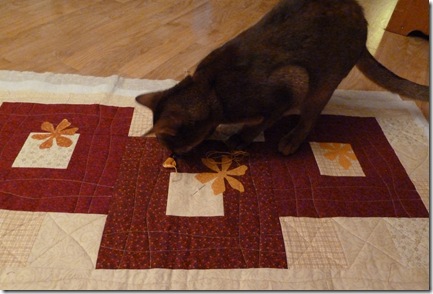 A very old UFO.  This pattern came in 2004 (design AnnAKa) and it has been stored away in my UFO box for a very very long time.  Basted and quilted it this weekend and started to applique the flowers.  Now I have to applique the last three flowers and sew some stems (and of course the binding) 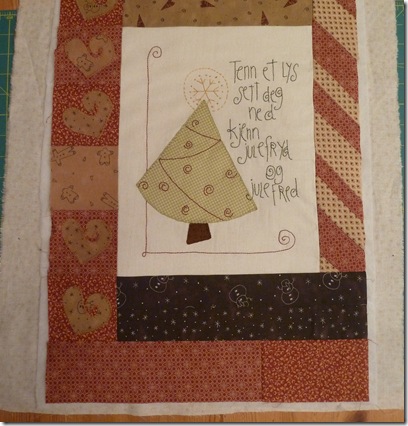 Another old UFO was sewn together.  Will start to handquilt this one.  The text on it says: Light a candle, sit down, feel the joy and peace of Christmas. 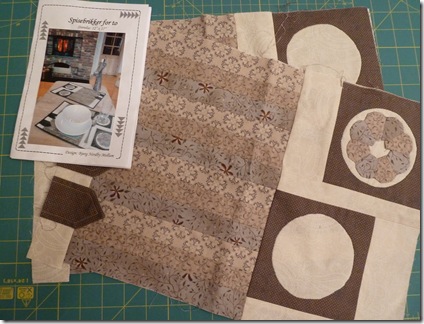 And then there was last years Christmas gift from my friend Bjørg.  Had already done a lot on it, then it was put away in a box.  Just half an hour of sewing and it was put together.  Now I have to make the last three dresen flowers and applique them on. 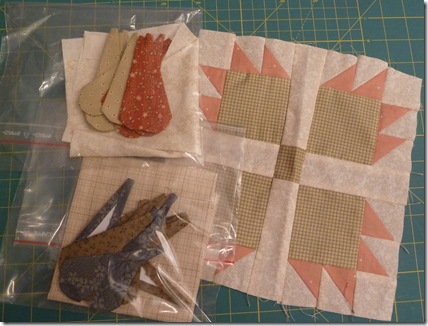 I also manage to sew one block for Svennebrevet, and prepare two other blocks.

Long weekend (wednesday evening to sunday evening) filled with vitamin Q.  And I am so surprised I manage to do all this sewing.  We also have had time to eat and sleep.

Wherever you go,
no matter what the weather,
always bring your own sunshine.
~Anthony J. D'Angelo

I'm glad you had fun quilting/sewing at your friend's cabin. For the last three summers my daughter and I have been able to spend several weeks at a friend's cabin in Tennessee. So restful and so productive!

WOW - you really did accomplish a lot of stitching! :0)

Delightfully busy weekend you have had. Great to be so productive.

LOL....what a wonderful weekend May Britt, so many lovely projects

Don't you wonder how women used to sew by candlelight? Especially when it was a dark and rainy day.

Wow...i am so impressed, all those things done! And fun with your friends too, a perfect weekend.

May Britt
Quilts are like friends - a great source of comfort. This is a blog of my quilting life. 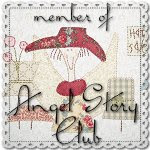 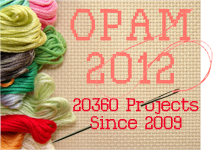 My Tutorials and free pattern

You can find a lot of quiltbloggers here:

Scandinavian quiltshops with a blog

Norwegian quilt groups with a blog

I have been a guestblogger here :) Visit this blog saturday oct 16th 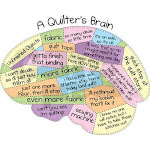 My finished projects in 2014

My finished projects in 2013

My finished projects in 2012

February
a pair of potholders

My finished projects in 2011

May
A little present for Madam Samm

May:
- selvage purse
- Hannes Challenge "On the road"
- Thread wallet for Irene

May:
One tiny little pin
(housepin)

October:
3 stitchers angel gifts for my friend
And I finally got the binding on to my hexagon quilt (thank you Bente)